Bulgarian rose water for drinking is selling in the best Shops

Bulgarian rose water was presented by Our Partner in Saudi Arabia. They start selling Rose Drops in Jedda and most of the Big cityes of the kingdom. The result is visiblle and the drink is wllcome in all the shoping malls all around the country. We start export the drink a Year ago But we are one of the most fast groing sales drink on the market. Our organic products is warlmy wellcomed between the people of Saudi Arabia.

Bulgaria produces one tonne of rose oil annually. The fragrance is very expensive – the prices go up to 10,000 euros per litre of rose oil. Three types of roses are grown in the region:  rosa damascena (light pink and with the strongest scent), rosa alba (white) and rosa centifolia (‘hundred-petal rose’, dark pink).

The city of Taif in Saudi Arabia is famous for the cultivation of this flower, which is called “Ward Taifi”

Damascus roses are used in cooking as a flavouring ingredient or spice. It appears as one of the ingredients in the Moroccan spice mixture known as ras el hanout. Rose water and powdered roses are used in Persian, Indian, and Middle Eastern cooking. Rose water is often sprinkled on meat dishes, while rose powder is added to sauces. Chicken with rose is a popular dish in Persian cuisine. Whole flowers, or petals, are also used in the herbal tea “zuhurat”. The most popular use, however, is in the flavoring of desserts such as ice cream, jam, Turkish delights, rice pudding, yogurt etc.

Western cookery today does not make much use of roses or rose water. However, it was a popular ingredient in ancient times and continued to be popular well into the Renaissance. It was most commonly used in desserts, and still is found as a flavour in traditional desserts such as marzipan or turrón. It has seen some revival in television cooking in the twenty-first century. 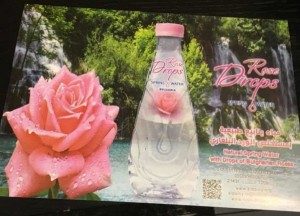 Rosa × damascena is a cultivated flower, no longer found growing wild. Its origins were traditionally thought to have been in the Middle East, though recent genetic tests indicate it is a hybrid of (R. moschata x R. gallica) crossed with the pollen of Rosa fedtschenkoana, suggesting that a more probable origin is the foothills of central Asia, home of its pollen parent.

The Crusader Robert de Brie is sometimes given credit for bringing the Damask rose from Syria to Europe sometime between 1254 and 1276. The name refers to Damascus, Syria, a major city in the Middle Eastern region. Other stories say the Romans brought the rose to England, and a third account says that the physician of Henry VIII gave him a Damask rose, as a present, around 1540.